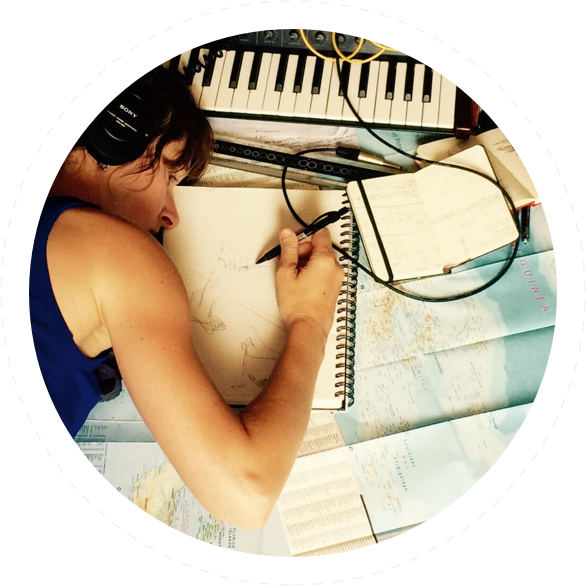 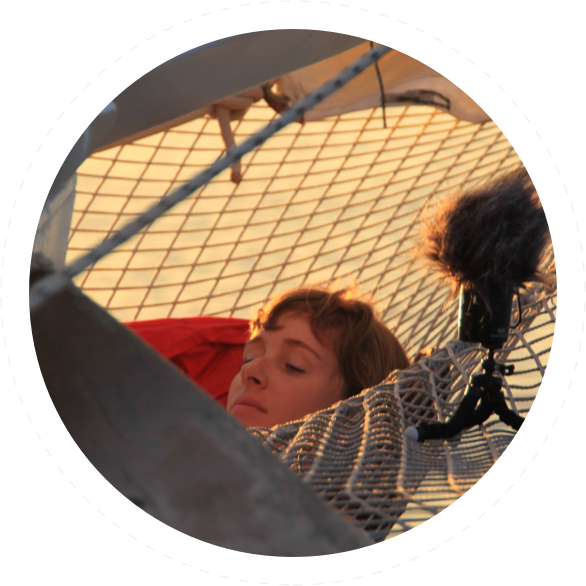 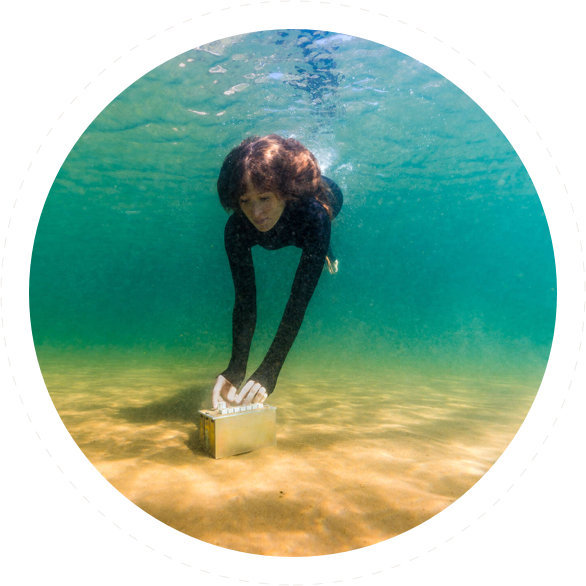 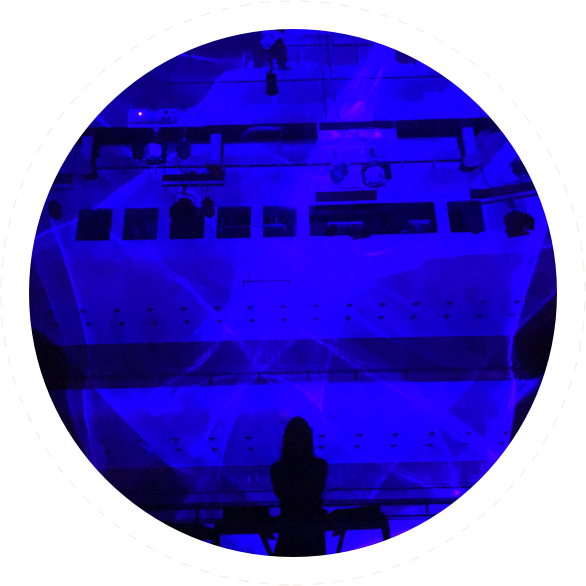 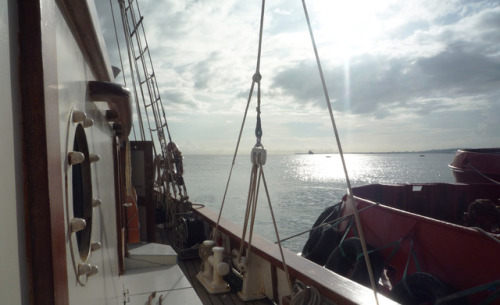 We’re leaving Honiara tomorrow under continuous Southeast winds, heading towards Bougainville. I’ve started inspecting the different hydrophones on board and all other devices that may sound interesting – there’s plenty! 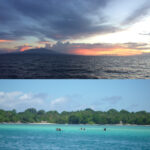 Day 3: Navigation and arrival at Gomai
After two days of navigation Northwest up the New Georgia Sound we hit the Shortland Islands, the last Solomon province before Bougainville (PNG). These are very little navigated seas and no other boat was ever in sight. On the days we sailed I discovered the ship with its routines and many nuances of noises and sounds new to me, listened to the latest undersea recordings with Yaiza, the biologist on board, and prepared for composition. We passed the Kolombangara vulcano at sunset (upper picture), and the full moon made our nights very clear.

We found a bay on the map which looked like it could be interesting to explore, just North of Ghaomai (Gomai) Island. As we entered the bay many from the village headed towards the ship in their pirogues; we left Fleur de Passion anchored to go look for the village’s chief Silverio and ask if they would let us stay in the bay for the night or more. After two sets of friendly tractations Silverio accepted our staying for a few days against a compensation of food products (rice, salt, sugar and choucroute) as we had no Solomon dollars left. We agreed to present the expedition to the people of the village, if a generator could be used to run the projector – there is no electricity or data network anywhere around these provinces.

Day 4: Jungle at Gomai
Here’s an extract of the jungle West of Gomai village at sunset. It’s in binaural format so you should listen with headphones. Onsite the sound level was very high, and I was amazed to find it was a periodic soundscape!! – do you hear this? 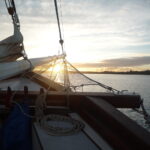 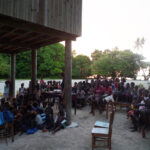 a presentation of the expedition at the village

I spent my days at Gomai recording under- and over seas in a very noisy jungle on the islands around (Taukuna and Gomai, listen in previous post), diving to the reefs staring in the eye of clown-fish, painting the unbelievable colors of the reef waters, making some binaural tests on sounds of sea bottom with sand and dead corals, and exchanging with the people of Gomai whom we’ll miss!

Peter the teacher and his four children, Marta and Chris the diver, and of course all of the kids we met at the village’s school when we made a presentation of the expedition. We showed a film about the project – it took a while to find a strong enough generator for the projector, in a village organized without electricity.

This afternoon I boarded a pirogue to go swim ashore with the other kids and learned a few words of the village’s language with Meri, Melinda and Anna. There’s about 70 local languages spoken in the Solomon, while Pidgin (mixture of Melanesian grammar and English vocabulary) is used to communicate between different islands and provinces. The kids have their local language as mother tongue, then learn pidgin then English at school.

No one lives on the west coast of Bougainville by the sea, due to the old tradition of head-hunting that was conducted by the Shortland Islanders… Peter the teacher told us. So every Thursday, a couple of boats leave Gomai towards the autonomous province of Bougainville to sell Shortland fish to people that still live up in the mountains. Tomorrow morning we’ll say farewell to the bay and the Shortlanders to sail North towards Bougainville then East New Britain Province of Papua New Guinea.

(pics below: the tiny island of Taukuna and its reefs just ashore Gomai, and kids on board Fleur de Passion checking out the hydrophone)

Day 10: Arrival in PNG, some tunes from the legendary Pacific Gold Studios in Rabaul

We arrived at the Gazelle peninsula in East New Britain Province of Papua New Guinea yesterday morning; we were heading towards Rabaul but we’re anchored off Kokopo as Rabaul, once a major city of the South Pacific area was almost completely destroyed by the eruption of Mt Tavurvur in 1994. The bay is amazing and…surrounded by four majestic craters – Tavurvur is still active. I’ll try to go explore what is left of of Rabaul, and maybe climb up Kombiu (Mt Mother) in the next few days, as Fleur de Passion is staying in the area for a crew change this week.

Below is a selection of tunes from the now destroyed Pacific Gold Studios in Rabaul: 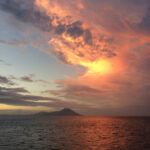 Day 13: Tomorrow Papua New Guinea has been independent for 42 years

September 16th is PNG’s National Day. The volcanoes around Rabaul are not erupting like in 1994 (and 2006 and 2014) but the sky is burning every night here.

I’ve worked on the first few minutes of music and shared them with the crew! Really cool to hear their impressions as they know these sounds I’ve worked with.

Tomorrow is a very special day to be in PNG, we’re heading to the parade early in the morning and I’m planning on recording there too. 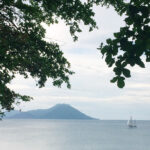 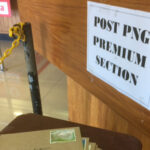 Yesterday I hit the post office as promised for my backers 🙂

Tomorrow we’re leaving Rabaul early morning towards Kavieng in New Ireland – throwing presents into the sea, hoping for some wind. 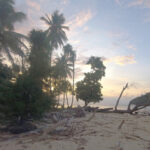 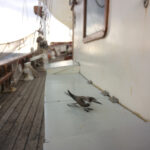 The Bismarck Sea has been (almost) just ours to sail for the past ten days, island-hopping around the insular provinces of PNG. I haven’t posted updates for a while as there is no data, electricity, etc etc here…
Every few days another ship’s in sight on the horizon. No earth other than atolls and islands where meeting villagers and exchanging dry food for fruits, stories, dances and life tips.
After a not-so-serene night in the bay of Kavieng we left early for New Hannover where we chose the small island of Ungalabu to spend a day and a night. Hermit Island kept us longer and as it was difficult to leave we had to skip Ninigo on the way to Indonesian Papua.
Now Vanimo’s in sight, last city before the changing border with Indonesia. That’s where we’ll clear formalities for leaving PNG, then clear in at Jayapura tomorrow morning.
Recorded over and underwater much of last night, under a cristal clear milky way; at the bottom of a sky full of new constellations cassiopea’s upside down. I also have tons of jungle sounds from Hermit Island: bamboos, rats, spiders, ants and reefs.

The Bismarck Sea’s very calm and deep blue, when no shark seems to be around we swim over 2500m of darkness and unknown. Some parts are  "undocumented", grey on the map: as no cargo ever uses these routes no one needs to know what’s underneath. Sometimes birds take a break on our boat to rest… or die. 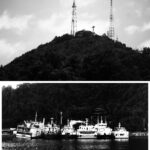 Our gate in to Indonesia is the city of Jayapura in West Papua.
The Bay of Jayapura looks like a mini papuan version of rio.
We’re heading to the archipelago of Biak tomorrow.

Day 35: Biak
After a stop in the city of Biak we’re heading to Padaido Islands, a new archipelago in Indonesian Papua.

Here’s some good news: I’m staying on board longer than planned! New tracks are growing along my nights and my days. 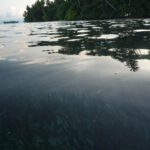 These marine fields make a very different seabed than corals, which I’ve recorded too. I headed to this little island called Pulau Uriv looking to capture more jungle sounds and listen to the sunset underwater. 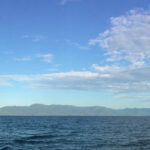 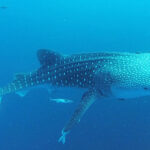 Day 40: Desert side of Papua

On the Indonesian side of Papua large areas of land are uninhabited. We haven’t found small villages like in PNG or Salomon there. Apart from the peaceful company of huge whale sharks, this leg, the last one for me, has been a lonely one.

We’re glad we got strong wind tonight, and it made the pike pole sing on the rear deck. 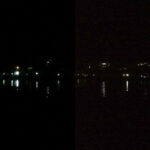 Last night’s rest hasn’t been so calm just offshore Manokwari, where we’ve had to make a stop for food before heading to Sorong.

In a few days I’ll be leaving the expedition with so many sounds, pictures, film, memories and much more I will need time to sort and think. At the end of next week I’ll hit my rear base in Hong Kong, and soon after head back to Europe to build up and mix the pieces of music I’ve had on my mind and started making on board. Stay tuned!! 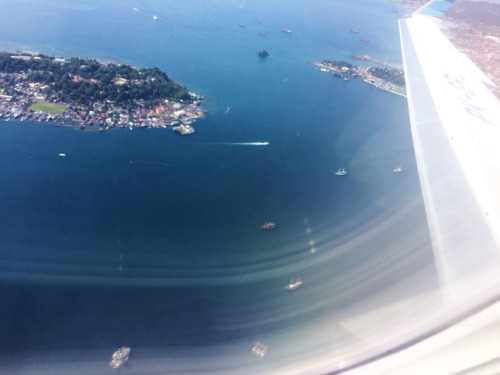 Day 50: Leaving Fleur in the Bay of Sorong

I’m really looking forward to develop and deliver my work from these sounds, and a short excerpt “in progress” could appear already in November!

Continue to MUSICOMEXP / next part of the story: Composition and Première