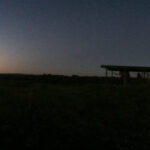 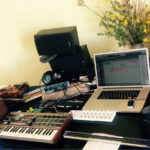 inside the miradouro house 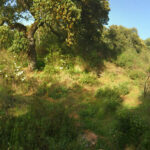 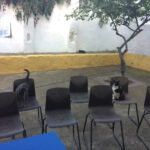 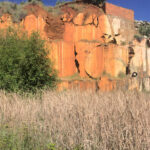 After a month at Obras Foundation I’ve gathered some thoughts, creations and discoveries I’ve come by along my residency.

My plan was to write and record new music for an upcoming record, and while doing that experimenting around my way of composing to change it. I’ve recorded some material, written more, but also played and performed in different situations, building a soundscape in and around a natural environment, improvising sound illustration to another artist’s poems with different arrangements, as well as painted and played chamber music.
Two thirds through my residency I had an artist talk where I described the composing ideas I was dealing with and trying to develop then.

I started with drawings and paintings I do in between recording takes, mentioning my interest for the organic process of growing, corked trunks being a motive I’ve used for many years and overly present here with Alentejos cork oaks, and linking it to my fascination for some examples of painting on wood existing in Lisbon being one of my anchor points to the city.

I then described the idea and the process behind my latest release in 2016 which shows different facets. I first went through the background and concept for the project “Cikatri$”, the latest release being a record with a cyclic artwork in several parts to solve in a dynamic puzzle, the music pressed on blended-colored vinyl. The musical content is on the A-side a recall of a band a few weeks into a tour in Southwest USA, and on the B-side an electronic version of it showing a direction I am taking. When the record was released it was first presented as a 3D-audio mix in a special listening session in Stockholm, then in a live performance later on the same day. More information about the project here.
I then talked about my background as a classically trained musician and Tonmeister, and how I deal with my hearing and sensibility in my creation. I’ve been looking at ways to deal with tones more freely despite my hearing since I have perfect pitch, still without handling music styles seriously since I have little interest in them. I described examples of sound recollections I’ve made in that purpose, then the discussion moved on to the well-known associations process in synesthesy.

I talked about musical collaborations I’ve had in Stockholm and suggested collaborations with performances or work in progress to other artists present at Obras at that time, which resulted in the sound illustration of a poem by Norwegian artist Matias Ringheim in two versions (electronic with analog synths, and acoustic with a piano), and a chamber music try with Beate Schnaithmann, a cellist from Switzerland.
The other great subject of this residency for me has been to explore my time, as to consider a routine both in composing as in organizing musical training and for example going through written material.
This is a relevant question in my case in regard to my next project from September, where I will be on board a sailing boat for several weeks to compose music using the sound recorded by the scientific team on board for environmental research, modular synths and tools, and various field recording material (more info about this project here)
A less technical, more conceptual reflexion also started then for me from my time at Obras in regard to this upcoming expedition, considering both art and nature in my creation: building a sound scape in a very green and very noisy place known in the region as the “hidden paradise”. For now just a few pictures below about this performance, which might develop into a video- and sound- work that might be presented in Stockholm soon. Stay tuned!
/Aurélie

Thank you Carolien van der Laan and Ludger van der Eerden at Obras and everyone I’ve met, artists and friends under my residency, read Obras’ May newsletter here